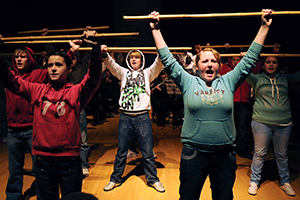 Future Plans – REASON TO BELIEVE is the second stage of a trilogy of work entitled WE LIVE, inspired by the Lewis Jones trilogy of novels of the same name, that began last year with a production of a play for young people written & directed by Larry Allan, MORE THAN JUST A GAME that was performed at The Factory, Porth.

Larry Allan will lead creative workshops featuring fictional MP, Eddie Makepeace in schools and communities, leading to an intensive Summer project in August in The Factory in Porth culminating in a showcase performance in mid August.

REASON TO BELIEVE is an intergenerational piece focusing on young people in the Valleys aged between 14 and 25, following their journey from adolescence to adulthood, as seen through a sequence of rite of passage plays, that they themselves help to create.

National Theatre Wales are supporting a seed commission for the final part of the trilogy ‘TATTOO’ a multi-genre, large scale production celebrating Valleys’ culture in 2017.