This is the topography of the writer’s day; a landscape where we constantly search for things to do other than putting a pen to paper. Doing the washing up, filling the washing machine, hanging out clothes, checking the weather forecast then bringing them back in again; there is a whole litany of airtime to fill before we can reward ourselves and switch on Pointless. Personally, I ride my bike. Which is not pointless at all. 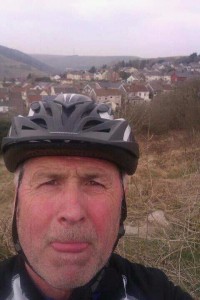 In spite of what cynics may say, riding a bike is not displacement activity but an essential element in the writing process. In fact the point of riding a bike is to write plays. I ride therefore I write. As a mental aid, I am actually riding my bike now and writing this introductory blog. And as a visual aid, here is a photograph of the biking blogger high above Gilfach Goch testing my nascent camera phone prowess. This is a moment of disturbing epiphany, as I realise at moments of acute concentration, I poke my tongue out. The epiphany being that I must concentrate less and relax more.

As I look at this unsettling image another realisation dawns over my shoulder. There, in the legendary village of Gilfach, otherwise known as the town where the tarmac ends – there’s a lot of them in the Valleys – is the site of my first working experience in Wales. In an old, leaky, near derelict junior school in the early eighties, I rehearsed the part of Giovanni in Can’t Pay Won’t Pay for Spectacle Theatre.

I remember from photographs, that this was where my moustache made its first appearance as a gay Greek waiter, even though I was supposed to be playing a Welsh Italian. But it made people wet themselves with laughter, gave me a lifelong love of olives and a near psychotic aversion to moustaches.

Spectacle Theatre, still with us and fighting back from swingeing Arts funding cuts, then contained such luminaries as Jamie Garven, now acting guru at the Royal Welsh College Of Music and Drama, Clare Hudson, Queen of all she surveys  at BBC Wales and Lynn Hunter who has become Wales’s answer to Bette Davis – or possibly Joan Crawford.

If they could see me now.  And of course they will as they’ll be unable to resist the lure of a sighting of a monstrous  Peloponnesian moustache as I traverse the Valleys like some camp, cycling Zorba.  In fact, as an introductory passage into this website and biking blog, I propose to revisit every venue on that rock ’n’ roll Spectacle tour of 1983. Some places so far flung and remote I will have time to grow a pretty credible replica of the original moustache. Watch this Bloggy Bit, because I’m coming to a mountain probably nowhere near you. 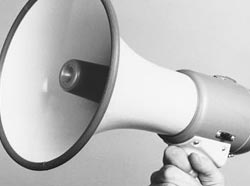