A SEE THROUGH CHAPEL

NOT SUNBEAMS THROUGH BROKEN GLASS

Feeling good should be one of those prerequisites of everyday life like having warm clothes, a local rugby team and a conservatory. Actually I’m lying, as only one of those is essential, one is a distant memory, and the other is a marketing ploy. But for too many people feeling bad is the psychological currency they have to deal in every day and fending off cold callers a minor diversion in what can be a bleak landscape. Which is where Valleys Kids and their ‘Feeling Good’ groups arrive like the therapeutic cavalry. Which is why my arrival at the Tuesday lunchtime group in Penygraig feels a bit like Doctor Hokum and the Medicine Show driving his wagon over a serene picnic.

A gaggle of ladies have gathered in the gleaming glass basement of the new state of the art chapel for a garrulous and mouth watering lunch before choosing from a panoply of state of the art massages from a crack team of state of the art therapists. Feeling good doesn’t come much better. Unless of course some clown turns up and asks them to chew over some yuletide haiku in between mouthfuls of pasta salad. But these are not just ladies who lunch, these are ladies who have a go, which  they proceed to do with such enthusiasm that I am convinced that some of them are actually making suggestions in Japanese. As I’m about to make some stupid joke about sushi sandwiches I realise that it’s Mrs. Parry, the doyenne of Soar chapel, talking to me in Welsh. With uncharacteristic mental agility I manage not only to avoid the sushi joke but spell Mrs. Parry’s suggestion of Nadolig Llawen correctly and translate it as well. So keen am I now not to offend one of the surviving chapel elders with cheap irreligious innuendo that I lose concentration and on the suggestion of Christmas stockings find myself locked into an extended paean to ladies’ lingerie. I break into a cold sweat – which doesn’t look good when you’re talking about women’s underwear – and try desperately not to catch Mrs. Parry’s eye, or anyone else’s for that matter. I’m tempted to flip the flip chart over  my head and pretend I’ve left the room but it’s too late, I am already surplus to requirements. The ladies have the bit between their teeth and have taken over and within minutes have reeled off three haiku.

As they all filter away for their particular therapies I’m tempted by the Indian head massage but through the glass I’m sure I catch a glimpse of the orange haired kid  and wonder whether it’s not a euphemism for some rather more painful apache ritual. But as I leave I realise I’m feeling good, in fact, better.

GOOD WILL TO ALL MEN

BUT I WISH ACTION MAN WAS REAL

LOVE AND HOPE. I WONDER

SHALL WE DECK THE HALLS?

SILVER, GOLD AND RED,  CHRISTMAS PAST

Strictly speaking the Japanese haiku should have five syllables in the first line, seven in the second and five in the third but this is not an exact science so if we take in a bit here, take a bit out there, but sometimes – 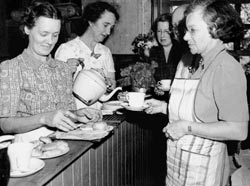