This is a short film made by Newport students who went on to form the production company LIKE AN EGG headed by Keiran McGaughey.  I only play a small part and it’s here mainly because it includes performances by Dorien Thomas and Brian Hibbard who died far too young last year. I’ve worked with them both  a lot and they were both huge talents and their involvement in this low profile film demonstrates they were never beyond supporting the next generation of talent. I know Brian and Dorien would wish LIKE AN EGG all the success I know is coming their way. 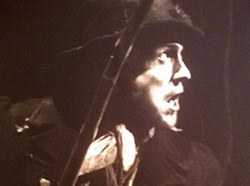 'He used to be an actor, then he was a writer, now he says he's a director. Make your mind up.' Well, to all interested parties, I'm available for all three.
Read more in Acting Up