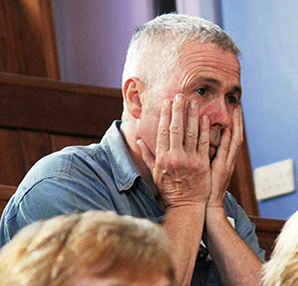 Reviews have all the power of a sniper’s bullet and after thirty years they still have the capacity to inflict a wound that can lay me low for weeks. And even then you carry it around like a bad smell. But a good one is like an uplifting breath of wind that can keep you buoyant for days. Well I’m not going for the warts and all approach and there will be no bad smells on this site just the fragrance of ‘flowers’.  Read an excerpt here…

If you are of a certain age, as playwright Laurence Allan and I are, you will almost certainly have experienced the pain of knowing an older relative with dementia, where a loved one gradually loses their short-term memory and lives in both the past and the immediate present with no way of telling which is which.

Generally it’s a subject treated with sympathy but with great seriousness – you may have seen the film Iris, for example, or read any of the numerous soul-searching features in magazines about coping with Alzheimer’s.

Larry Allan, though, is not one to be conventionally reverential and his latest play, produced by Theatr y Byd, makes a very funny comedy out of the condition – a liberty I guess we can allow him to take since it’s obviously drawn from personal experience.

In fact the portrayal of Reah is marvellously affectionate, honest in showing all those distressing symptoms of apparently irrational behaviour, anger and cruelty, and deeply moving in giving us a real person – and, in this fiction, one whose irascibility is maybe not so irrational.

Reah is taken on an unexpected holiday to Tunisia by her friend Rose, where she meets a flower-seller and falls in love. Or, rather, does not so much fall in love as has triggered the repressed memory of an old, old secret love affair.

It’s an experience that makes her very happy, and the flower-seller, Khalid, a sensitive man from a culture that honours age, love and respect more than ours, knows that falling in with her confusion is the most sensitive and appropriate thing to do.

Keith, of course, is as out of touch with reality as Reah, probably a victim of Gulf War syndrome whose life has conditioned him to violence and racism and he ends this tale still unaware of his mother’s secret love, still separated from his family, still lost, a true victim of Western imperialism.

What is remarkable in all this is that it is a very funny comedy, and the one-liners come out thick and fast – sometimes from the man-eating Rose but also unwittingly from the erratic and unpredictable Reah – and Chris Morgan’s direction moves it along unfussily.

In fact it’s one of the very best plays from this rather low-profile playwright and it benefits enormously from some excellent individual and ensemble performances. When you have Christrine Pritchard as Reah and Sharon Morgan as Rose you can hardly go wrong, but William El Gardi and Nathan Sussex create cultural opposites sensitively and believably.

In one sense it’s a romantic comedy, of course, a love story where the real affair is in the past but is evoked in the present, but actually it seems to me it’s a love story of a mature man for his mother – there are tears behind all this laughter, which makes the play not only sure-footed and intelligent but brave and moving.

2 thoughts on “Reviews of Flowers from Tunisia”