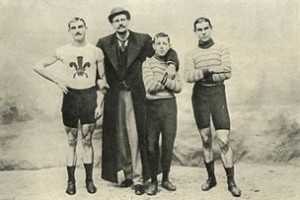 I have been riding a bike seriously for twenty years and up until recently it has been seen as the pursuit of the mad, sad obsessive. But suddenly cycling is the new black and the MAMIL  (middle aged man in lycra) is the new mondeo man – seen everywhere and hated by everyone.

But for all this celebrity focus there is a Welsh World Champion who remains stubbornly out of the spotlight. One hundred and twenty years ago, Arthur Linton, a young miner from Aberdare, symbolized the whole package of achievement including, sadly and disputably, drugs.

He was a world champion cyclist at 24 and dead at 27. He could sprint like a Welsh greyhound and grind out the miles like a gazelle on the Serengeti.  He took on all comers in the Valleys and Cardiff and whipped them soundly, humiliated everything England had to offer and then beat up the French and the Italians in their own backyard. Just for good measure he took on a horse ridden by Buffalo Bill and sent him back to Wyoming with his tail between his legs.

He did all of this, not on a featherweight string of carbon, but on The Gladiator, a bombproof steel boneshaker of a bike weighing in at just under ten kilo with one single 96 inch gear that a blacksmith would struggle to shift.

If this wasn’t enough he also had a daytime job as a haulier in the local colliery. And despite being in the local halls of fame, hardly anyone who is not a frequent visitor to the neighbourhood museum – remembers him.

Perhaps the reason he is a forgotten hero is the accusation that he was a closet villain. Before EPO, doping and Lance Armstrong, in 1896, Arthur and his trainer Choppy Warburton were at the centre of the first drugs scandal. Two months after winning the epic Bordeaux to Paris bike race, Arthur died.  Typhoid fever was the official cause. Except some people didn’t believe it. Why not? Perhaps some people don’t want believe things that appear just too good to be true.

Gladiator my latest play, a co production with RCT Theatres, about dreams and ambitions inspired by the Linton’s story, is touring Wales from Thurs 23rd April – Sat 16th May. Check out the Gladiator Trailer by Like an Egg Productions –