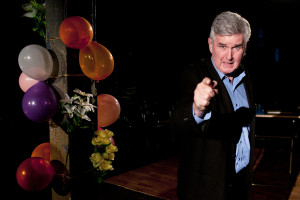 I spent the summer with The Chaingang toiling on the second part of the trilogy WE LIVE. It was supposed to be called Reason To Believe  but wriggled onto the stage at The Factory as Gimme Some Truth. All around us things were changing but everything stayed the same. There was a General Election when power seemed  destined to shift. And it did. But spitefully and smugly David Cameron’s contraceptive head still loomed over us. And in our theatre world of make believe, fictional MP Eddie Makepeace  was born.

We took him into schools and threw him into the cold cauldron of apathetic teenagers. Except they weren’t. They were a bear pit of carnivores, hungry for the flesh of defenceless  politicians. Not quite defenceless. He was armed with an arsenal of platitudinous policies culled from the whole political spectrum. Yes, it was a very narrow spectrum. The pack smelt blood and tore him to shreds. They tormented and tortured him and put him to the vote. Eddie Makepeace or anyone but Eddie Makepeace. Anyone but won in every school. What went wrong? Who knows. Ask Ed Milliband.

Then we put him on the rehearsal floor with another group of  young people. We were turning into the Theatre of Cruelty and actor Mike Morton was weeping for mercy. They were demanding some truth and straight talking. By the end of the writing and rehearsal process they got it when Eddie erupted in an expletive spattered explosion of rage and frustration against the gags and tethers that muffled his beliefs.

In our performances  at The Factory, packed  audiences held their breath at some salty language  then let their feelings show in stunned appreciation of what they’s seen. I think we’d done something different. Shown young people connecting with politics and politicians connecting with the truth.

Next up, Fast Theatre in pubs will be launched at The Rickards, Treforest, Pontypridd. I don’t think Eddie would survive. Then again, look at Jeremy Corbyn.